Friday night we had a reception at the National Cowgirl Museum, a beautiful art-deco building in the Stockyards district that honors famous American horsewomen. We got to ogle all the displays at the museum, and nibble on snacks. At the end of the evening, Breyer raffled off these 12 "denim" blue models. They were all done on different molds, but each was painted solid blue with gold hooves:

We also got a peek at the new "Esprit" model Breyer is producing for the FEI 2010 World Equestrian Games. Esprit will be available starting in February:

On Saturday we visited some horse farms north of Fort Worth: Carol Rose Quarter Horses, home to champion quarter horse Shining Spark, and McQuay Stables, home of Tim McQuay and and his champion reining horses like Hollywood Dun It and Colonels Smoking Gun. I really loved McQuay Stables - have never seen so many gorgeous horses. Lots of pretty palominos and white-faced duns, and a lot of horses with one or two blue eyes. SO pretty! Tim McQuay also came out and rode the guest horse, Shining n' Sassy: 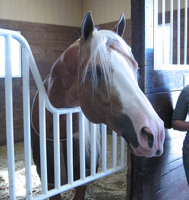 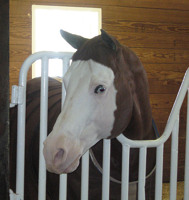 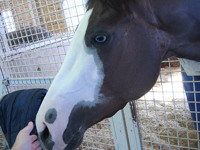 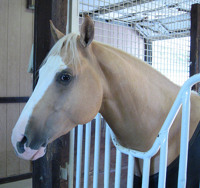 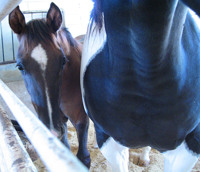 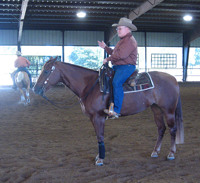 Saturday after the horse farm tours, each group got to shop the Breyer store for the LSE special run models. Here's a poster showing the various models (sadly my camera's flash wiped out the pic of Bluebonnet):

I took pix of Stetson, the light dun Stud Spider model, and Spindletop:

Breyer also posted these pix of some of the other SR's on their Facebook page:

We also got to pick up our "Shining N Sassy" models then too. She's actually better looking in person than in the pic on the Breyer site - she's a dark red chestnut with lots of lovely shading and coppery undertones. She also has some funky white spots scattered around her body, and a very light (like barely noticeable) dusting of white roaning around her flanks:

Finally we attended the "Denim & Diamonds" dinner Saturday night back at the host hotel. (We were supposed to dress to the theme. Fun!) Everyone got a plastic drink mug filled with candy and a cute little powder blue rearing stablemate who smells like bubble gum. :) The centerpiece at each table was a larger fighting stallion in the same powder blue, with a lacey silver pattern and sparking rhinestones glued to his body:

There was a table set up with some of the upcoming 2010 models: (note the new arab S Justadream and the bay Connoisseur Oasis model in front):

There was also another raffle of some LSE "grab bags", but I don't know what was in those.... although I did see one person got an Alborozo in theirs. Nice!